The Scintillating Fire of the Kotlar Cushion Diamond Cut 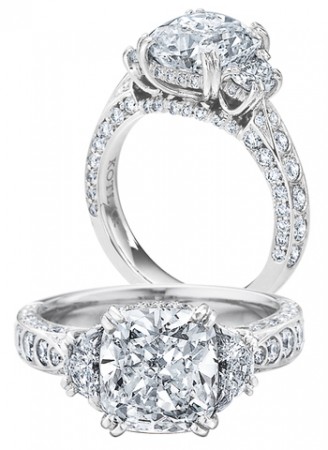 The Kotlar Cushion Diamond Cut is considered the ultimate in diamond jewelry cuts for its sparkling perfection. The diamond has long been a symbol of desire and romance. The Kotlar Cushion with its unique faceting pattern is the finest in the world for its exquisite proportions and appeal to diamond lovers.

The cushion shape features a large crown, a large open culet, and pavilion facets.  The Kotlar Cushion is the signature cut of Harry Kotlar & Company. It is a modern interpretation of the traditional cushion shape, featuring 61 facets where light is reflected by 4 main facets to the stone’s center, for the most scintillating fire and brilliance. The end product is a timelessly beautiful and sophisticated jewel now known as the Kotlar Cushion Diamond, originally created by David, the grandson of Harry Kotlar.

The Kotlar Cushion Diamond resonates with the graceful look of the classic cushion cut, with feminine lines and unique faceting pattern. The end product is an amazing, spectacular diamond with radiance that dazzles and a silhouette that will always be fashionable. They are truly captivating and will endure from generation to generation.

The Market and Distribution

Only the finest jewelers of the world sell Harry Kotlar Jewels.  They are sought after pieces by diamond lovers. The jewelers that sell Kotlar Cushion are experts on exquisite gems and are recognized in the jewelry industry for their knowledge and expertise. Owning Harry Kotlar Jewels is a privilege and the jewelry will be a fitting symbol of your deepest commitment and undying love, or your most significant achievement.

Kotlar Cushion Diamonds are sold in sizes of .70 carats to 20 carats, with color range of D to K and clarity range of internally flawless to S12. All diamonds by Kotlar are laser inscribed and come with a GIA report. When a Kotlar Cushion is delivered to a client, it is enclosed in an heirloom jewelry box accompanied by supporting documentation and a GIA report. Each Kotlar Cushion diamond is inscribed with the Kotlar logo and the GIA report number.

Harry Kotlar & Company employs state-of-the-art techniques in cutting diamonds, producing a stone with exceptional brilliance, dazzling fire and amazing radiance. The cushion cut was one of the first known cuts of diamonds and has been in the market for hundreds of years. Kotlar’s modification of the classic cut produces a stone full of fire. The Kotlar Cushion Diamond Cut holds a trademark for being the “world’s most brilliant cushion cut diamond.”

The cost of the Kotlar Cushion Diamond can vary widely from as little as a thousand dollars to as much as more than $500,000.  The shape of the diamond can also vary from square to a bit more rectangular. The corners are rounded and soft, evocative of feminine contours.

The large facets of the cushion cut have been created for maximum appeal in candlelight, as candles were the primary source of light in the old days. Kotlar modified the cut to produce the brilliance of the modern cut while retaining the romantic look of the classic cushion. The result is a modern heirloom that is treasured by today’s diamond connoisseurs known as the Kotlar Cushion Diamond Cut.